How to have a food-safe tailgating party 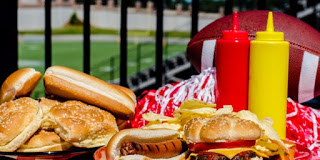 Football season is officially in motion! For some of us,
that means tailgating parties with friends and family before or after the big
game. Are you making sure the food you bring is safe to eat?
Always keep in mind the food safety basics: clean, separate,
cook and chill.
Tailgate safety starts with cleanliness! If there isn’t a
facility close by to wash your hands, consider bringing disposable wipes to
clean your hands with instead. Bring many clean, disposable utensils to prepare
and serve food with.
Separate your ready-to-eat foods like salads from raw meat
by using different coolers. Keeping a third cooler for drinks is a great idea
because it will be opened frequently. Coolers holding food need to stay below
40°F, so the less they are opened, the better.
It isn’t a bad idea to bring a food thermometer to make sure
meat on the grill is cooked to a safe temperature. Undercooked food can make
people sick, putting a damper on the tailgate party and the game.
Keeping food cool after the tailgate is important, too. When
everyone is done eating cool it as quickly as possible and store it in a cooler
to stop bacteria from growing on the leftovers.
Stick to the basics:
Have a safe and fun football season without getting
foodborne illness!